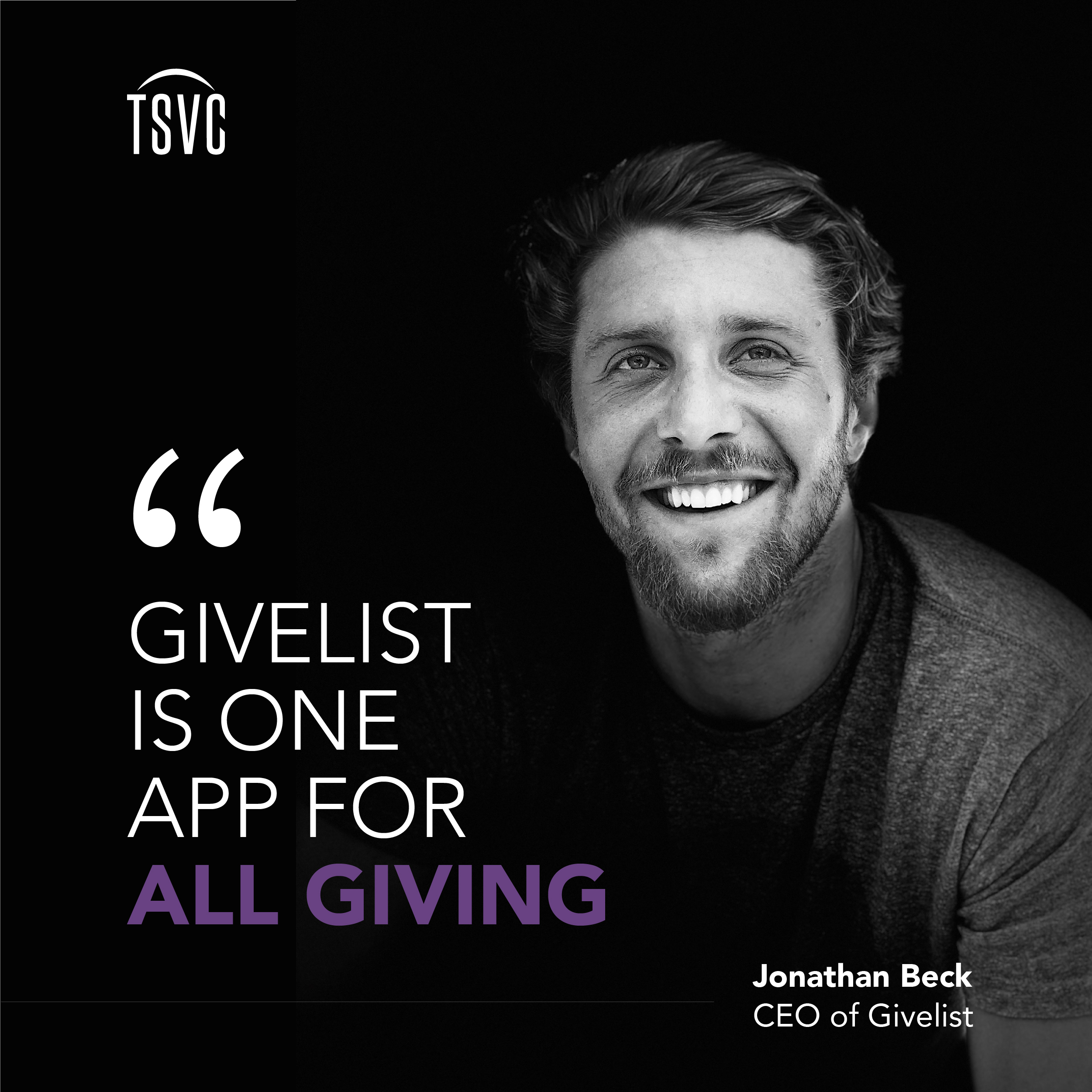 Founded in 2014 by Jonathan Beck, Givelist is a giving platform that makes donating to charity more efficient and transparent. Having worked both as a volunteer for nonprofit organizations and in fintech, Jonathan saw a need for financial infrastructure to make donating to charities easier and more accessible. We are proud to award Givelist the Alpha Program to Jonathan and his team.

Why We Invested in Givelist

The nonprofit industry is an underserved market. Many nonprofit organizations don’t have efficient ways to manage the financial processes, making it difficult to get started, receive donations, and retain donors.

Givelist helps solve a customer relationship problem. Donors often don’t get to see the impact  and how their donations are being used by nonprofit organizations. Moreover, there’s not much infrastructure that empowers people to give on a regular basis to the organizations they care about.

Giving to charity is finally cool. Gen Z, also known as “Philanthroteens,” refers to the generation of people born in the late 1990s and later. In contrast to the economically stable and peaceful social environment Millennials grew up in, Gen Z has been exposed to diverse issues from a young age. As a result, Gen Z has a greater awareness of all the different climate, economic, and humanitarian challenges facing the world. This awareness has motivated many members of Gen Z to make a difference in this world.

Givelists enable users to distribute their donations across many different charities. Jonathan shares, “so normally users can curate a givelist and publish them on a platform for anyone to give to, as well as many of the ones we’re curating right now with corporate corporations, like better foundation arm or with foundations spec where the purpose of the foundation is to write grants to nonprofits within a specific focus area so we help curate all those into a list that anyone can give to. So take Bill and Melinda Gates Foundation’s givelist for water, for example. Has like 9 orgs on it. If you want to give to organizations that Bill & Melinda Gates have spent millions and millions of dollars figuring out who the best organizations to give to for water, if you want to give to those, you can now. You don’t have to do a ton of research. You give $5, you can split it evenly among all of them.

Recurring donations. Most people give as a percentage of their income, so they choose a certain amount that they want to donate on a recurring basis, and Givelist helps them donate that amount and then distribute it however they want to different organizations.

Donor advised funds are built into the platform. Givelist has the ability to open a giving account and have a balance. You get a tax write off immediately for that balance and you can donate from that.  It’s much like your own charitable foundation that you can set up in a couple seconds. Normally to do that takes a number of weeks and a whole application status minimum. Givelist has  those built into the product.

Users can see what their friends donate to. Jonathan shares, “you can fundraise, see what your friends are doing, see what impact stories they’re getting tagged in, and use that as a discovery process. That’s more interesting to me than just browsing a static page. What are you passionate about? I’m passionate about homeless people. Oh you should check out this organization, they do such cool work! And I’m now interested in that organization!”

Donors can see their impact. Jonathan highlights: “When you give to charity, you’re purchasing a feeling that you’re making a difference. And the only people that get evidence that they’re making a difference are really the big check writers--mostly high net-worth individuals giving through foundations. They get invited to the galas and the fundraisers. They get the impact assessment reports from the donor experience managers. They get phone calls saying, ‘Thank you so much for your donation!’ They get to see how they’re making a difference. For everyone else...the only thing they get is spam in their mailboxes. All of those people actually represent around 10 times the amount of donation volume that comes from foundations, and they give more of their wealth than wealthy people in foundations do. What we’re doing is, for the first time ever...we’re basically creating a platform where not only you can give, but you can actually see the impact that your donations have on the world. So you actually see evidence of here’s the difference I’m actually making. Here’s a tree I helped plant. Here’s a well I helped dig. Here’s a kid I helped get surgery to for his cleft palate in Nicaragua or something. And not only is there evidence, but you actually get an emotional product. You get an emotional experience. You get to connect with that and you get to feel like you’re a part of something larger.”

Impacts on the Future

With Givelist as a new giving vehicle, Jonathan hopes to democratize charity and enable people to be more compassionate, sympathetic, and better. ”I want to give them that opportunity with an app. There’s a lot of apps out there that don’t do that. So I would love to make an app that gives people the opportunity to be more.

There’s a lot of orgs and people out there who are dedicating their lives to doing really amazing things. This is really the only industry where people are really passionate about something and the stuff that they’re doing isn’t a sellout. Nonprofit people are not nonprofit people to make money. They’re there to actually make a difference in a way that they think they can; it’s not a money making motivation. It’s the only industry that’s like that. So helping them do a better job, making it easier to access donations, making it easier to retain their donors, making it better and easier for people there to do good work are the mission here we want to deliver at the end of every single day ”.