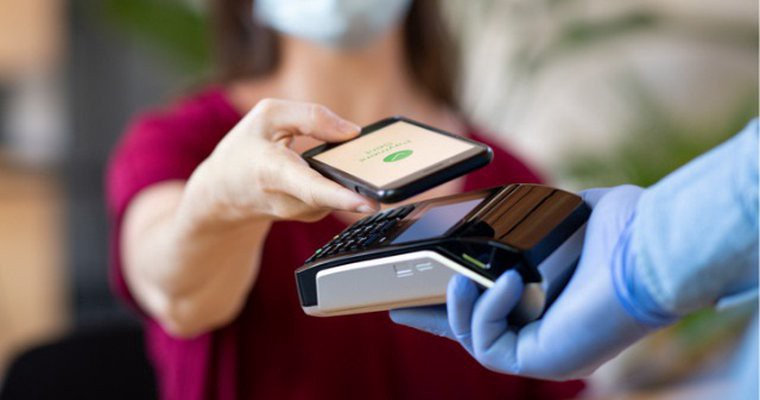 Sometimes, when we rifle through our bag for cash to pay for a latte, I wonder if there will be a day in my lifetime when I’ll miss the feel of a wrinkled dollar bill in my hand. Even before Covid-19 pushed consumers to seek less corona-risky ways of making transactions, touchless payment was already trending in Europe, Asia, and North America. In China especially, cashless solutions have taken off. As opposed to spending habits in the US, the credit card trend was practically skipped altogether in China as citizens have preferred the ease of WeChatPay, AliPay, and UnionPay with their mobile banking solutions, eliminating the need for a physical wallet altogether. Lightening the load even more, Alipay’s facial recognition payment technology was released in hospitality locations like bakery WeiDuoMei, where a customer just needs a few seconds for the specialized device (which resembles a giant iPhone) to pay for their baked treats. No wallet or cellphone required — just a smile. US consumers, on the other hand, have remained reluctant to adopt this new technology. Companies like Paypal have long had their sights set on expanding into retail businesses with touchless payment, but with US spending habits lagging behind in new tech trends, that idea has been on hold.

Moving Away From Credit Cards

Over the years, America has lagged behind in adopting contactless payment technology. As mentioned previously, this 20-year-old technology has already gained massive popularity in Asia, and has especially bloomed in China and South Korea. The world’s first contactless payment system was actually launched in Seoul for transit purposes in 1995, offering riders a quick and easy way to pay for bus trips without the hassle of carrying change. In fact, according to a 2018 report from consultancy firm A.T. Kearney, roughly 20% of the transactions in Australia, Canada, South Korea and the UK already use contactless payment. So why have Americans been so slow to adopt this clearly relevant technology?

America’s predisposition to payment cards could be one of the most prominent explanations to this trend. In general, Americans have become accustomed to paying with credit cards, lessening the need for contactless payments. Also, the fragmented nature of the American market and its infrastructure has made it difficult for contactless payments to be universally incorporated as quickly as some other countries. Despite this state of affairs, the US is slowly but surely coming to terms with the fact that contactless payments are, in fact, the way of the future. The global pandemic has forced Americans to realize the benefits. It has unleashed the germaphobe within every one of us, causing people to reach for the hand sanitizer as soon as they’ve touched a dollar bill. Although the pandemic has certainly taken a heavy toll on a large amount of businesses and industries, it has boosted the American adoption of contactless payment technology by a substantial margin.

Covid-19’s impact on spending habits may be the break companies like Paypal — and the US mobile banking sector — have been waiting for. According to the NRF, usage of touchless payment is up 70% since January 2020 in the states. Since acquiring Venmo in 2013, Paypal has yet to see the popular peer-to-peer app turn into the money machine they’ve hoped for. But with the pandemic creating proper conditions for expansion into retail with touchless payment technology, Paypal’s opportunity to take on the retail frontier and plug in Venmo’s forty million plus users has finally arrived, and their game-changing ambitions are being backed by leading mobile payment and commerce solution provider, Citcon, a company TSVC supported back in 2016.

Enter CITCON — the Engineers of US Mobile Banking

Right now, Venmo’s consumer-facing platform isn’t tailored to handle day-to-day retail and hospitality transactions; local taxes and fees as well as tipping servers go unaccounted for in its peer-to-peer payment system. That’s where Citcon comes in — by creating Venmo’s QR-based backend technology for businesses, merchants can have the customer’s payment go directly into the POS system by scanning their Venmo QR code. With Citcon’s help, millions of WeChatPay, AliPay, and UnionPay users will be able to use their preferred mobile wallets at US retail locations.

Heading Towards Our Future’s Seamless Commerce

The digitization of all walks of life is continuing to change our day-to-day habits at a break-neck pace. Being able to adapt to change with industry leading and customer favored solutions is a necessity for merchants to capitalize on the market’s growing demands, said CEO, Chuck Huang when Citcon raised five million dollars in 2019 to power their global expansion of mobile payments. And not to mention the other benefits — reduced tax evasion and money laundering crimes, fewer cash robberies, and saving some of our planet’s dwindling greenery, just to name a few. With Paypal’s millions of built-in users and Citcon’s tech-savvy support, the duo is moving forward to pave the way for the world’s clean, seamless, and efficient global commerce.