How to spot a unicorn: Don’t grow it — synthesize it! 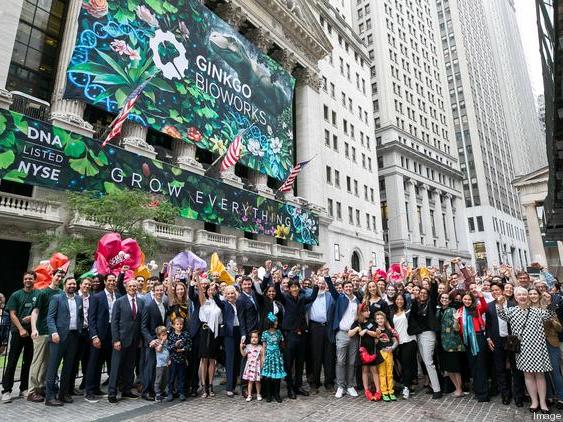 On Friday, September 17, 2021, Ginkgo Bioworks became a publicly traded company on the New York Stock Exchange, trading under the ticker symbol “DNA.” Its market valuation quickly exceeded $20 billion. Since the firm joined the company’s seed investment round seven years ago, TSVC have consistently said that Ginkgo has the potential to be an industry-defining company, and to do for biology what Amazon, TSMC, and Apple have done in their domains -- and the public market seems to agree with us.

Venture capitalists often call an IPO an “exit,” suggesting that it’s the end of a journey; but of course it’s just a step along a much longer journey; and the company aptly positioned this milestone as the “end of the beginning.” Here at TSVC we couldn’t agree more.

Today’s spotlight, rightly, belongs to Ginkgo’s stellar team. We congratulate them on the work they’ve done and look forward to all they are going to do. And here, as part of our “How to spot a unicorn” series, we’d like to rewind the clock to August of 2014 and share what our founding partners saw back at that time, and how they came to back this exceptional team.

In the summer of 2014, TSVC was still a young firm proving itself. They were investing out of their second fund, and their 2011 seed investment in Zoom had yet to become the breakout success it is today. It was August 19th of that year when the founding partner, Eugene Zhang, heard Ginkgo’s Jason Kelly pitch on transforming how biological molecules are created. In a 4-minute presentation, sandwiched among 46 other startups presenting that day at the Computer History Museum, Jason proposed: “Instead of growing a plant in 10 years and then extracting certain high-value ingredients, we will synthesize it in 10 days.”

The word “synthesis” struck a chord. It’s a concept that crosses disciplines, and TSVC have experience in several of these disciplines. For example, in computer science, program synthesis is the construction of software that provably satisfies a given high-level formal specification. In chip design, logic synthesis is the most important technology used by human designers to turn high-level chip descriptions into silicon circuits. Of course, “synthesis” in chemistry has a more prosaic meaning as well; but what Ginkgo proposed to do was much more in the direction of the “magic” that had been accomplished in other industries: starting from pure information and generating a useful product.

Eugene’s immediate thought? This is big. It could actually be bigger than the semiconductor revolution. It could be the biggest innovation in our lifetime.

Eugene chased down one of Jason’s co-founders, Austin Che, at YC’s Demo Day social event. Austin is a Bay Area native, and, unsurprisingly, he and Eugene discovered that they know a lot of the same people in the local community (through Austin’s parents, to be more precise - never underestimate the family connection :).

Austin had his BS from Stanford, and a 2008 doctorate in Computer Science and Synthetic Biology from MIT; by 2014, he and the Ginkgo founding team had been working together for 6 years on the research that undergirds the Ginkgo proposition.

Things moved a little slower in 2014 than in 2021 -- it wasn’t until August 27th, a full eight days after Demo Day, that Jason and Eugene met at TSVC’s Palo Alto office. They knew the potential here was historic. The question for Eugene et al. was, do they think they can pull it off?

In recent years, TSVC has formalized the “Three Pillars” framework for seed-stage investing, with more formal evaluation and scoring mechanisms to analyze a company’s team, market, and product. Back in 2014 TSVC hadn’t yet given a name to this framework, but it was an early version of what they do today.

First they evaluated the founding team. Seed stage companies usually don’t have useful metrics yet; in many cases they don’t have product; and even their choice of what market to serve can be fluid (Zoom’s was). Team is always the first of the evaluation criteria.

In Ginkgo’s case, the founding team comes from academia. TSVC is comfortable in deep-tech investing: nine of the 16 investing partners are industry practitioners who hold Ph.D.s themselves, and TSVC maintain close ties with academia; but perhaps more importantly, Eugen and team understand what kind of team it takes to commercialize research innovation.

Ginkgo has five co-founders. Professor Tom Knight is the most senior of the founders; the vision for the company grew out of his experience in electrical engineering, computer science, and synthetic biology. The four other co-founders were recent Ph.D graduates. Jason was still young, without much business experience, but he demonstrated outstanding communication skills in articulating the company’s vision. Most importantly, the co-founders had all been working together for 6 years, with government research funding, prior to raising venture capital.

The team is very strong on paper, and more importantly, they passed the “intangibles test.” TSVC’s own Ph.D. partners listen to deep-tech founders to evaluate their pragmatism and groundedness -- the Ginkgo group impressed us as being capable of, and ready to, be both revolutionary and commercial.

The second evaluation criterion is market potential. The company has to be solving a multi-billion-dollar opportunity within five to ten years from the time of seed investment.

Synthetic biology was a young field at the time, “[using] molecular biology tools and techniques to forward-engineer cellular behavior.” 2014 marked the 10-year anniversary of iGEM, the synthetic biology competition that started at MIT, but most of the work in the field was pure research. Biofuel production in E.Coli was not yet mature, and the first large-scale production of the semisynthetic antimalarial drug artemisinin had just occurred. Synthetic biology was an emerging sector bridging computer science and biology; there was no existing market data to reference, but the opportunity nonetheless was vast.

The third pillar of the evaluation looks at product and technology.

MIT’s Synthetic biology center pioneered this emerging field, and the 5 co-founders were all key contributors. Ginkgo had early customer traction and business partners, mostly in fragrance and food yeast.

The biotech part of the diligence was done by one of TSVC’s Fund II venture partners, a molecular biologist by training. His analysis of the science was beyond the scope of this article, but the conclusion was that Ginkgo’s plan appeared to be just on the edge of feasibility. That’s exactly where a deep-tech innovation needs to be to be fundable: if it’s too easy there will be many competitors, and if it’s too hard it will never be commercialized.

Ginkgo met TSVC’s three criteria. Finally there was a fourth consideration: how ambitious are they? In particular, would this be a company that would be acquired for a modest price, or build a world-changing enterprise? An email from Jason tells how the company was thinking:

There is the possibility of an acquisition, but I think of it as downside risk protection (i.e. we could sell to a BASF or DOW if things weren't going well) rather than as a desired outcome. The reason we do not prefer an acquisition is that engineered organisms have broad applications, including in medicine, energy, food, and materials.

In 3-5 years I hope to be convincingly winning in the plant extract product line (~100 organisms or more) and have signed our first major deals with customers in pharmaceuticals and energy. Then we can go public on real traction with our first product (plant extracts for F&F, cosmetics, etc.) along with compelling evidence that we are expanding into new, very large markets.

On Sep 12th, 2014, with the three pillars framework in place, the TSVC team made a final call to participate in Ginkgo’s $5 million seed round. The process took a total of 20 days from the first introduction to the company to investment commitment -- a fairly relaxed pace relative to some of the other deals, with enough time to get an understanding of the science and technology involved.

The beginning of the future

Ginkgo’s subsequent private rounds, and its recent IPO, have given it more than $1.5 billion of capital to scale the business. The TSVC team never doubted that the vision that Jason and Austin articulated in 2014 would meet reality; still, it’s impressive to see the first stages of it happen, and to think about what’s still to come. From early on, Ginkgo projected that what they’re doing would become ubiquitous and penetrate into our daily lives in unexpected ways - hence the comparison to the semiconductor revolution. The company’s innovations, which started in flavor and fragrances, hold promise to transform industries as diverse as antibiotics, nucleic acid vaccines, and enzymes, among many others.

In the antibiotics world, for example, humanity is in an arms race against bacteria. Discovery of new antibiotics has been slow; Ginkgo’s technology promises to accelerate it dramatically. Similarly in the fields of nucleic acid vaccines (think mRNA) and enzyme discovery (through partnership with Synlogic), the ways scientists find new valuable molecules can be transformed.

With a billion and a half dollars in its war chest, it’s now up to the Ginkgo Bioworks team to execute. TSVC’s 2014 thesis for the company was that they could someday become the Amazon or TSMC of biology. We cheer their success to date and look forward to how they will amaze us next.