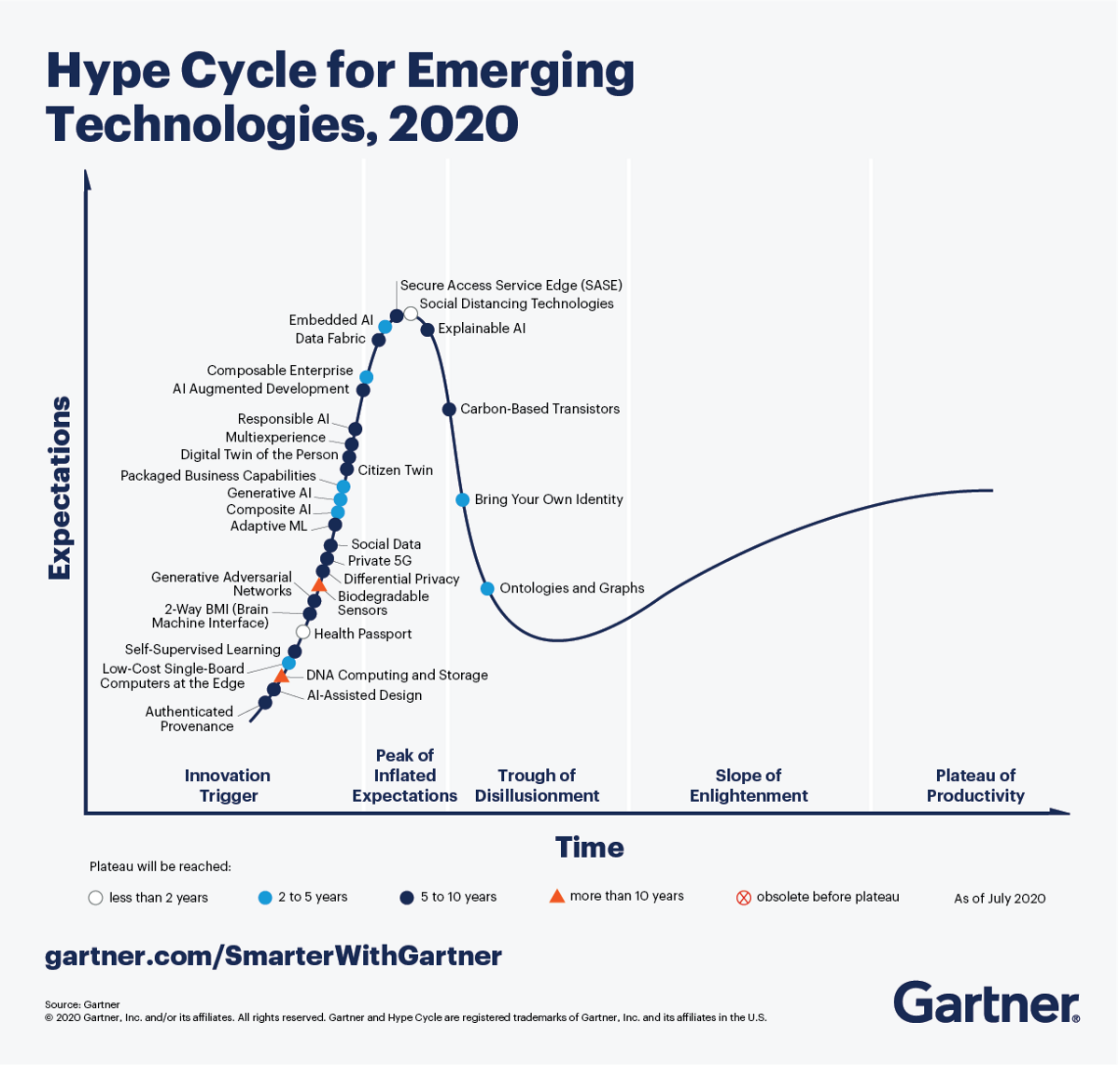 AI has quickly become an alarmingly unnoticeable part of our everyday lives. From providing us with tailored shows on Netflix to unlocking our phones, it is hard to imagine life without the convenience of AI. However, history has shown that when it comes to AI, the perceived advancement is not as quick as we may think and there is more hype around the so-called intelligence than actual results would warrant. AI is often overpromised and under-delivered.

Signs of this became apparent in 2018 when IBM confirmed layoffs in its Watson Health department. Though the number of jobs on the chopping block was unclear, IBM said the cuts affected a small percentage of the global Watson Health workforce - the percentage that applied artificial intelligence to the healthcare space. Through the Watson project, IBM was attempting to create an AI doctor, however, the project was unsuccessful.

Kuangshi Technology, a Chinese company that specializes in facial recognition, is further evidence of AI being overpromised and under-delivered. Its algorithm has been applied to many security, government, and civilian processes, and is well-known throughout China. Despite this, it is not producing the expected revenue for its IPO. This isn’t a one-off case. Another Chinese company, Unisound AI Tech, which specializes in voice recognition is not producing revenue and has filed for IPO. Regardless of their high demand and valuation, both Kuangshi and Unisound got denied by the China SEC for not exemplifying strong business growth. Through this, we can sense that although there is a big AI hype, it is not as successful as we may think.

So why do we hype AI in the first place?

It all begins with the terminology we use. Intelligence is a household concept, everyone (with a reasonable amount of intelligence) understands it, but everyone interprets it differently. The more technical terms of “edge computing” or “container technology”, although significantly more accurate, have never been understood by the general audience. The word “intelligence” is easy to hype up and attract attention and has often been emphasized to the public through accessible mediums such as sci-fi movies. When AI is equated to “human intelligence” in the eyes of the public, it gets easy to promote it without requiring a deep understanding.

If we consider the five stages of Gartner’s hype cycle and apply this to the current wave of AI, then it is evident that we are entering stage three in the cycle - Trough of Disillusionment.

Today AI is a fashionable word, however, in a few years people in the industry will begin to realize that it is a hoax, that it will never deliver. History will repeat. As a result, AI will quickly become a “dirty word” among executives, because they will realize that it brings only limited success, and startups who currently label themselves as AI companies will need to find new ways to categorize themselves.

In the past 40 years, AI has undergone two cycles of hype where it has been overpromised and under-delivered. To understand and predict what may happen in the upcoming years, let’s step back in history.

The first hype cycle of AI began in the ’80s. It originated from Japan’s national initiative of the 5th Generation Computer System, which aimed to produce concurrent logical programming for knowledge processing. AI at the time was equated to human intelligence and believed that it could do inference and knowledge processing, that it would be a very intelligent computer. With the advance of technology not yet far enough, this was not the case. It ultimately failed due to the high cost of the special-purpose hardware needed to make the computer fascinating enough for the time. Additionally, there was a very limited market for such a product to succeed.

As a consequence, AI did not take off as hoped.

The hype around AI, however, did indeed boost high-performance computing in the supercomputing world. As a by-product, it enabled people to build a computer that was considered extremely fast for the time. ‍

The second wave of AI hype began in the early 2000s with Web2.0, specifically in 2003 after the internet bubble recovered. It had a significant impact, introducing social media and platforms such as Flickr for photo sharing, and allowed people to open up and use the web as a service. Soon after the Web2.0 movement, a group focused on AI began a new hybrid movement - Web3.0.

Web3.0 did not gain much public awareness, however, it was immensely popular in the Silicon Valley tech community where people were enthralled with the vision of the Semantic Web. The idea behind the Semantic Web was that you could retrieve and add meaning to web content through AI, allowing us to understand all of the aggregated web content around the world. As a result, the global web would have been a giant global knowledge base, the World Wide Web equivalent to a human brain.

It was an exciting movement but did not take off because of the amount of highly intensive labor work needed. For the computer to understand the meaning of things and know what it needed to find, people needed to manually label the definitions and meaning. At the time it could not be generated automatically. Once there was the semantic framework established and the labels were defined with meanings identified, then the computer could “use” its knowledge. This vision, however, did not take off at the large scale that people expected.

Despite this, similarly to the first wave, there were resulting byproducts. This AI hype catapulted big data analysis because people began using semantic analysis for data to find out the meanings. It also resulted in the beginnings of the recommendation engine. Additionally, it stirred the beginnings of sentimental analysis. With social media advancing it generated UGC (user-generated content) and allowed people to research themselves and their brands because the meanings of the keywords had been identified. It developed taxonomy over keywords and enabled people to retrieve relevant results and even set alerts.‍

The current AI hype trend arose in 2020 with AlphaGo when it beat human master players and the public thought it’s time for AI to replace human knowledge workers. The technology for this wave is different from the previous waves and originated from the advancement of neural network-based machine learning, aka deep learning. Human intensive work is no longer needed as long as the computer is fed with sufficient data and with proper data labeling for AI model training.

Nowadays AI can beat a human chess master, something that people have always feared, but this machine learning AI system is built on brute force. The technology has existed for the last twenty years, but previously the computer systems have always been too slow. In recent years with the advancement of hardware, machine learning has been good for more domestic tasks where the rules to follow are clear, but AI continues to fail with the more open-ended problems. This subjectivity is the challenge that scientists face. Today’s AI is still unable to compete with the intelligence level of a three-year-old because of its inability to reason and adapt. Consequently, there has only been very limited success in limited market segments.

The current hype may generate a certain level of demand, but the market will never grow into the scope as promised or perceived in the near future because of the intrinsic technical limitations. However, we can foresee the blooming of many smart applications powered by deep learning. ‍

The aftermath of the AI Hype in specific domains‍

After the hype of AI, even if it does not survive we will begin to see, as with previous waves, byproducts. Firstly there will be companies deep in the vertical that will solve real-time problems. Lex Machina, a joint Stanford research project between the law school and the computer science department, is a prime example of this. In the US, law practice relies on lawyers to remember an extensive number of specific cases. Lex Machina uses AI to process a huge number of legal cases focused on IP litigation. This service automatically retrieves all the cases specific to a certain field of subject, solving the issue of memory. Even before the AI hype, we understood the technology behind the company and invested in it. Since then, Lex Machina has been acquired by a big law firm.

A further example of a company deep in the AI vertical focused on sentimental analysis is Stratifyd, a watchdog for social media. As previously mentioned, in the second wave, the Semantic Web collected the keywords and assigned the meaning, building a taxonomy for the computers to do the analysis. With Stratifyd, deep learning is used to train the AI so that you no longer need to pick the keywords manually, the machine will automatically establish the necessary ones. We invested in 2012, before the AI hype, because we believed that the startup’s focus on that narrow problem would be effective.

TSVC will continue investing in this type of AI if it looks to solve a narrow problem as opposed to a wider, more universal problem. Avoma is another such company. Focused specifically on note-taking for Zoom meetings, the AI processes natural language off of a transcript. With plans to begin auto-generating meeting minutes, the deep learning will soon be able to understand and establish the script.

Deep learning has also been used to deep dive into the verticals of mobility and healthcare with Plus.ai, an autonomous driving specifically for trucks, and in medical imaging. Stanford AI Lab professor Andrew Ng is leading a team that is working on an AI medical image system, starting from the diagnosis of breast cancer. As an assistance tool for doctors, AI would be used for more efficient diagnosis. Despite a lack of positive advancement in the last two years with AI in the medical industry, we expect this to become the next big area of focus.

It is already evident that the post-hype residue of this current wave has similar patterns to the previous two waves. There will be successful by-products. We are also starting to see a lot of money going towards the development of new AI chips. We have recently invested in d-MATRIX, a new AI chip company, that has an innovative idea to use analog computing instead of traditional binary computing. This would save power, be faster, and be more compact. Future AI chips will create a smarter network and environment. Similar chips are already being used in the smart edge devices for AIoT applications.‍

I believe that AI is not super smart. It only works for certain problems and domains. When we use AI there needs to be a deep understanding of the technical constraints, it is only then that we would be able to access its full potential. AI does not work for everything in a larger context, and it is imperative that startups and investors pick the right areas to focus on and advance in.‍